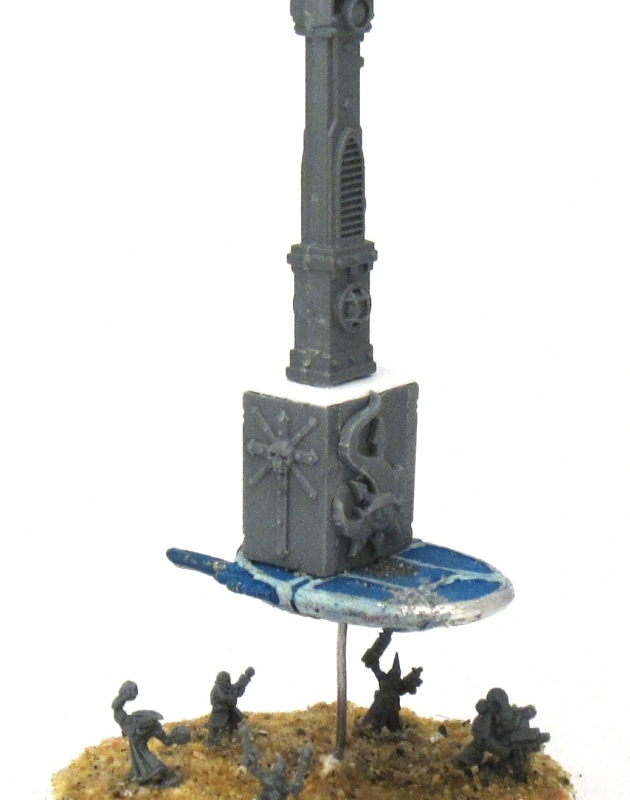 Second and third basing step is completed. Step two involves glueing sand on all the bases (except the as yet unbased Ketzali for lack of washers). 5 backbreaking hours of sanding. I hate this step. It is by a wide margin the biggest time suck for 6mm Epic models. It implies putting on thinned Weldbond glue, pouring on sand, using a stiff bristle brush to “wash” each model with some water (this rinses glued on stray sand of the models) and then give it a quick flick with a dry stiff bristle brush to get any remaining loose sand off.

I am sure that is an easier way to do this, but after 1000+ epic bases I haven’t found it yet . For bigger models I use pre-blackened pumice but for the small stuff this is pretty hopeless (at least at my level of hand-eye coordination other rather what is left of it after a few hours of basing).

Step 3 is thankfully straightforward: spray everything black. Once they are dry the final step will be to patch up the black coat manually, then drybrush Bestial Brown, drybrush Bleached Bone and finally paint the rim in Bestial Brown.

As a small reward for this accomplishment I converted up a Tzeentch and Slaneesh altar, as well as a Khorne objective.

The Tzeentch altar is still missing some king of high priest model on the front of the disc. Apart from the old 40k disc and the Tzeentch icon I didn’t have any Tzeentch specific bits so some 40k terrain pieces had to do the job.

The Slaneesh altar is build up from some spare Hirst Art pieces. It’s hard to see but there are 25 models under the altar to carry the platform into battle. The Keeper of Secret head is from an very old Warhammer model that I found in my bits box. I still need to give it one last layer of Green Stuff to put hairy texture over the “neck” piece.

The Khorne objective uses some old Epic Bloodletter, a Hirst Art skull (carved on the bottom as the original piece is a flat-bottemed ornament) and some chain. I bought 2m worth of that chain to make the leash for the Khorne altar so now I might as well use it! The models will be painted up as brass statues.