Man O’ War is a naval combat game set in the Warhammer world. The game uses fairly straightforward dynamics common in naval games (e.g. sailing speed depending on wind direction, ramming and boarding, etc.). All major Warhammer faction of the 90s are represented with fleets but the game balancing is very poor for some factions, especially the later additions in the Plaguefleet expansion set.

While situated in the Warhammer world, the game departs from some of the iconic concepts of that environment. The game has in general a lighter tone than Warhammer with many tongue-in-cheek elements. Some fleets also change the traditional historical references of the Warhammer world. For example, the Bretonnian fleet uses the equivalent of 17th century sailing ships while the Empire employs much earlier galleys. This isa reversal of the Warhammer framework where the Empire is more technologically advanced (e.g. gun powder weapons, steam engines, etc.).

History: Man O’ War is one of the oldest non-core games released by Games Workshop. With a core box and two expansion boxes it actually received substantial support in the early 90s. Unlike other Games Workshop games of that period, Man O’ War was not transitioned into the Specialist Games series and simply disappeared instead. A solid fan base has kept the game alive since then. Models are still available on EBay and other second hand venues but have become collector items. This makes them one of the few Games Workshop products that have actually increased substantially in value over time. Especially the rare plastic mast sprues are worth their weight in gold these days.

Scale: Man O’ War models have no consistent scale. The models are all approximately 1” to 3” in size but proportions vary from fleet to fleet.

Basing & Painting: I wanted my paintjobs to evoke the cheerful tongue-in-cheek style of the early 90’s. The fleets are therefore painted in bright colours with bold highlights.

The original Man O’ War models came without bases but the hobby community quickly realised that this is an impractical solution for a game where the entire up touchable area of models is extremely fragile (sails and plastic masts). I used a sheet metal stamper to create 1/8” iron bases for each model. That adds weight, stability and the ability to use magnets for storage. The base sizes vary by model in accordance with the unofficial base size guidelines (which allows bases instead of models to be uses for targeting). I coat the entire base with a mix of plastic wood filler and a little bit of water. This creates a very malleable material which dries rock hard but doesn’t “tear” when pushed into waves. Spackle or other fillers that I use for regular basing would tear or crack during wave-making process. Once dry, everything is painted Regal Blue followed by drybrushes of Ultramarine Blue and Ice Blue (wave tips only). I also drybrush a bit of white onto areas with turbulences such as oars, paddles and the wake of fast ships.

The sails are made from canvas paper. This gives them a very nice woven cloth texture which is unfortunately invisible in a lot of the pictures due to their relatively small size. I print the black colours with an inkjet printer and then manually apply highlights and washes where appropriate. Doing this manually helps to create a “painterly” effect and makes the sails look less “printed”.

Terrain & Accessories: Man O’ War requires a seascape which renders my regular terrain collection entirely useless. I made four 2’x2’ terrain tiles using ¼” MDF. Unlike my usual terrain tiles these are neither framed nor foam enhanced (no need for “deep” features on a water table). I painted them in a variety of blue tones with spray cans and then gave everything a very coat of varnish to get the “wet” look. 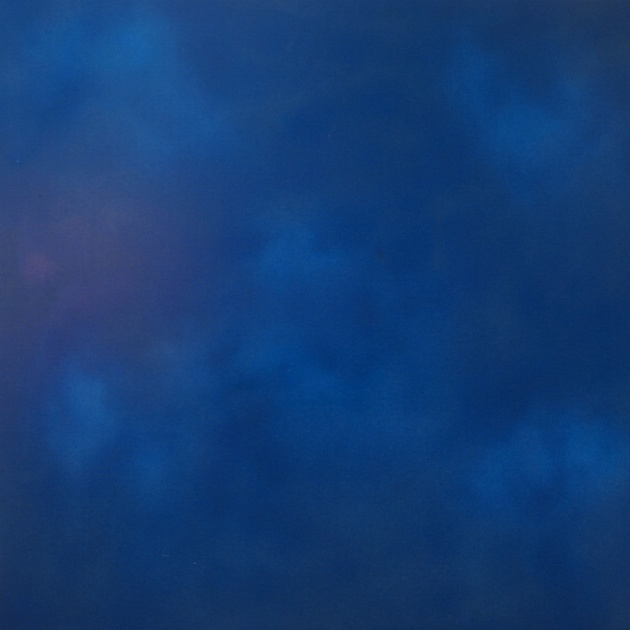 I used my normal “hill construction” method to make a few pieces terrain for the board: ¼” MDF base with bevelled edges, high density foam on top, carved and coated with sand. A few of the pieces are large enough to have landscaping on them. For these I use a scale that is at the lower end of the range of the “variable” Man O’ War ships. This is particularly true for the two peninsular pieces where I tried to give the illusion of a city on the horizon.

Sea Monsters were introduced in the Sea of Blood expansion and I have one of each of the available models. They are painted according to the Man O’ War illustration and based on 30mm diameter iron discs to separate them visually from the rectangular bases of conventional ships. From the top left we have the Behemoth, Megaladon and Black Leviathan, then the Gargantuan, Kraken and Sea Dragon, and finally the Promethean, Triton and Sea Elemental. The white dots on the Sea Elemental are reflections as it is coated in gloss varnish to match the “wet” water on the base. 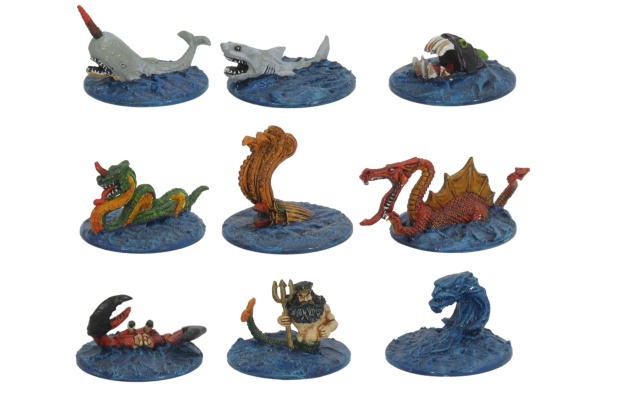 One of the problems with the otherwise excellent Man O’ War rules is that they rely heavily on ship cards. Those cards came with the different boxed sets and are used to place counters for crew, damage, ammunition and so forth. To play a decent sized 4’x4’ game you often need another 4’x4’ just to lay out all the cards. Like many hobbyists, I addressed this issue by making my own record keeping system. I re-designed the card templates using Visio, then shrunk them to a smaller size and grouped them by fleet and squadron. The finished design was printed on laser labels which were in turn stuck on thick cardboard and laminated. The laminate allows me to make in-game annotation with a dry erase market rather than having to place lots of counters. Each ship template has a custom flag design that matches the flag on the actual model.