This section will capture some of my ongoing projects, show work in progress and provide a few tutorials (i.e. completed works in progress). Below is a list of “projects in waiting” indicating their real world activity level (“on hold” or “active”). I will upload progress updates as blog posts and put together regular pages for completed projects as tutorials.

Not included on the list are “leftovers”. I don’t think I have a single army where at least a few low priority models are still in unfinished state. “Completed” really just means “playable at conventional point levels with all options in the army book at least available once” (e.g. my WFB Empire army can field all options and comes to about 8000 points in painted units – that third unit of unpainted Pistoliers will likely languish in the “to paint” drawer for all eternity).
For similar reasons my “wish list” of not yet bought projects is also not on the list (otherwise my 3GB hosting limit would be used up by text characters…). The item below are new projects where the models are usually assembled, based and awaiting the gentle caress of the paint brush…

Overall, this adds up to about 2000+ unpainted models. Progress is slow and steady, though I barely achieve a higher rate of production than purchasing. At the current painting/buying rate I will be “done” sometime in the 41st century…

Below are some progress stats that I will update periodically.
Status as of May 2016 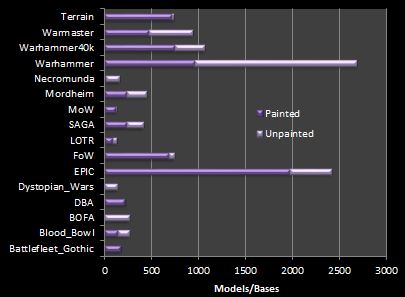