Just like the Ork army, Chaos forces have a wide variety of units. Moreover, the four dominant gods of chaos provide a nice theme to different parts of the army. Unlike the Ork army I used a distinct paint scheme for each god and relied on the chaotic appearance of the whole army to tie them together as a cohesive force (at least visually, in terms of game play the retinues are likely to operate all by themselves in their quest for destruction).
The themed Warbands (Khorne, Nurgle, Tzeentch and Slaneesh) are each based on a mix of models to emphasis their chaotic nature. For this I used different chaos marine models from all editions of the EPIC game as well as god-specific daemons and specialised marines. For example, the Khornate warband has the odd Bloodletter and Berzerker on the regular marine bases. Likewise, assigned transports such as Rhinos have been converted to emphasis their connection to a particular god. The exception to this is the “neutral” Iron Warrior legion which has a more regimented look to them.

Iron Warrior Warband: The Black Legion is the undivided core of the chaos horde, free of association with any of the four major chaos gods. The warband consists of two retinues including extra bases for all optional character upgrades (lord, sorcerer and champion). Both retinues have a full complement of Havocs and Rhinos for transportation. The Iron Warriors are the least visibly warped of the chaos warbands so most of the equipment is similar to their imperial counterparts. The paint scheme is Boltgun Metal, black detailing, yellow safety strips and a Devlan Mud wash over everything. The Rhinos are custom design from the talented online modeller “Nik”. They are colour-coded red and purple for the two retinues, with a gold top door chaos star for the Rhino of the character and black stars for the Havocs. The lone Dreadnought was a test model and needs a few companions to complete that upgrade option.

Iron Warrior Support: Two Forlorn Hope units with Rhinos provide a bit of scouting power (and use imperial scout marine models to emphasis the theme). Mobile support comes from a bike retinue based on first generation space marine bikes. Finally, I converted up four Obliterators from old Robot models and assorted other parts.

Iron Warrior Heavy Support: The Iron Warriors field their own heavy support element in the form of eight Predators, two mighty Decimators, four Defilers and a Death Wheel. The Decimators are based on imperial super heavy tanks and the Defiler are “Otterware” (home-made casts from a hobbyist going by the online alias of “Otter”). The Death Wheel is scratch build based on the common formula of using two 4mm round bases with 40k imperial tank tracks. A powerful Feral Titan provides fearsome firepower to the Legion.

Khorne Warband: Khorne is the chaos god of blood and war. His warband is consequently focused on hand-to-hand combat with a full retinue and four Berzerker units in Rhinos. The retinue has all character options except a cowardly sorcerer which doesn’t belong in a proper Khorne force.

Khorne Terminators:The retinue is supported by a full sized force of Khorne Chosen Terminators including lord and champion option. If needed, the Terminators can be transported in Land Raiders.

Khorne Daemons: The Khornate daemon pool is led by a Bloodthirster Greater Daemon and Angron the Primarch of the World Eaters (using a 10mm Warmaster model with a slight conversion to remove any clearly 10mm scale parts of the model). The pool includes a horde of Bloodletter, six Fleshhound bases and eight Juggernaughts (used as Riders). The Juggernaught are led by an optional lord made from a Warmaster model. Two Soulgrinder are based on “Otterware” Defiler with the addition of some 40k parts.

Nurgle Warband: Befitting the Chaos god of disease and decay, the Nurgle retinue is covered in sores, including the Rhinos. A group of Plague Marines and all optional character upgrades are included. Four Havocs and their Rhinos provide long range support to the Retinue.

Nurgle Terminators: A small unit of diseased Terminators can be used for deep strike attacks. The paint scheme is bleached bone and goblin green followed by a Devlan Mud wash.

Nurgle Daemons: The Nurgle daemonic host is the smallest of the four gods with a group of Plaguebearer led by a Great Unclean One. Mortarion Primarch of the Deathguard can be used as a Daemon Prince for the warband. 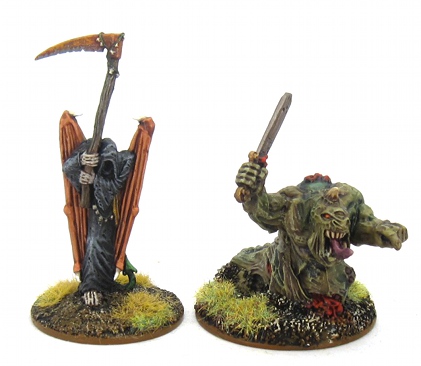 Nurgle Daemon Engines: A small squadron of possessed Land Raider, a possessed Decimator, a Death Wheel and a Warlord Titan provide very steady support to the warband. The Decimator and Death Wheel are converted version of the Iron Warrior variants with a bit of Green Stuff pustules.

Tzeentch Warband: Changer of the Ways, chaos god of magic and mutation, Tzeentch is represented on the battlefield by a full retinue including all command options as well as Havocs and Thousand Sons. The whole warband can be transported in Tzeentchian Rhinos. The paint scheme is Ice Blue followed by an Asurmen Blue wash and Ice Blue drybrush. The decorations actually come from 28mm Warhammer Khemri Undead models but seem to fit the mystic Tzeentch theme quite nicely. The Daemon Prince is the old Magnus the Red model.

Tzeentch Daemons: Daemonic support for the Tzeentchian warband comes in the form of Flamers and Tzeentch Screamers. The daemonic host is led by a Lord of Change greater daemon, the Magnus the Red Primarch of the Thousand Sons, and a minor Daemon Prince (using the 10mm Warmaster model).

Tzeentch Daemon Engines: Heavy support is provided by a Tzeentchian Death Wheel, a Warhound Titan and a Warlord Titan. All are converted to match the winged/colourful theme of the Tzeentch warband.

Slaneesh Warband: The Slaneesh warband consists of a retinue of marines with all command options, Havocs and Noise Marines. The Slaneeshi Rhinos are outfitted with Warp Amplifiers to spew forth the music of the chaos god of lust and guile. The paint scheme is based on Tentacle Pink followed by an Asurmen Blue wash and Tentacle Pink drybrush.

Slaneesh Daemons: Led by a Keeper of Secrets Greater Daemon and a Daemon Prince, the Slaneeshi daemon host includes a group of Daemonettes as well as a legion of Beast of Slaneesh (used as Riders). The Daemon Prince and greater Daemon are from the 10mm Warmaster range.

One thought on “Chaos Black Legion”